Caol Ila's Fčis Ěle 2014 bottling was selected by new distillery manager David Wood (a truly excellent name for anybody in a position to choose casks) who carries on Billy Stitchell's great work. Matured in refill American oak hogsheads, 1,500 bottles have been released. 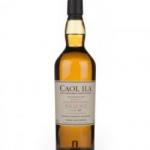 These bottles have been chosen over others because their nose, taste and finish are more similar to Caol Ila 2002 - Feis Ile 2014 than the rest. Go to Whisky-o-matic page to fine tuning other settings.