Distilled in 1997, this 13 year old Imperial was bottled by Duncan Taylor in 2010 for their range of non chillfiltered, non caramel coloured single malts (NC2).

This single malt whisky from this Speyside distillery is quite interesting with a good amount of spices on nose. Interesting option. 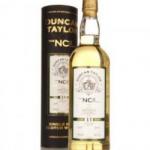 Other presentations, miniatures and samples of Imperial 13 year 1997 NC2

These bottles have been chosen over others because their nose, taste and finish are more similar to Imperial 13 year 1997 NC2 than the rest. Go to Whisky-o-matic page to fine tuning other settings.