The second batch of Amrut's lauded Herald expression. Four casks were matured firstly in Bangalore before being shipped to a cooler climate, namely the German island of Helgoland for a 'finishing' period. The first three were bottled as part of the first release - this is the fourth which has been released as a single cask, having spent two extra years on the archipelago. 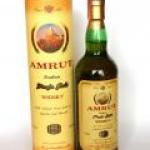 Amrut: the nectar of India
Did you have this bottle? Did you enjoy it? What do you think about the proposed similar bottles? Let us know.