Blended Scotch Whisky Bottled by: Compass Box 70cl /53.3% Double Single 10th anniversary a unique blended whisky, constructed of one single malt and one single grain whisky, 76% Glen Elgin 18yo, with the remainder being 21 year old Port Dundas. with a yield of only 876 bottles. 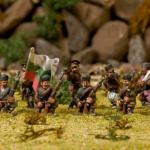 The Balkan Tiger and the Ardbeg's whispers

These bottles have been chosen over others because their nose, taste and finish are more similar to Compass Box Double Single 10th Anniversary than the rest. Go to Whisky-o-matic page to fine tuning other settings.