The 2013 release in Glenmorangie's annual Private Edition series of small batch wood experiments, Ealanta differs from its predecessors Sonnalta, Finealta and Artein as it has been full-term matured (rather than finished) in its designer casks, which in this instance are heavily toasted new white oak casks made with trees from Missouri's Ozark mountains. 'Ealanta' means "skilled and ingenious" according to the press release. 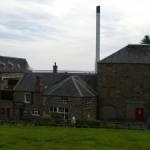