A very special, nay historic, edition of Johnnie Walker, this set was produced in 1985 to celebrate the 150th anniversary of the brand (which occurred in 1970), and includes a unique dumpy bottle of a specially produced Anniversary Blend along with a very handsome crystal decanter. (MISSING BOX DIVIDERS) 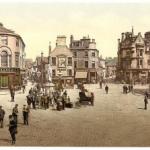 Johnnie Walker: the striding man keeps walking
Did you have this bottle? Did you enjoy it? What do you think about the proposed similar bottles? Let us know.