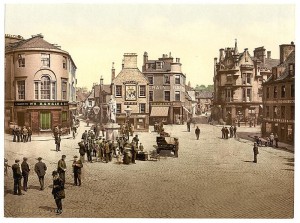 Johnnie Walker is the story of a brand that started in a humble grocery at Scotland and became one of the best selling whisky company in the world. Johnnie Walker openend many countries to Scotch whisky: Keep walking.

John Walker, born at Kilmarnock in 1805, was a shopkeeper at Kilmarnock, in Ayrshire, Scotland. He founded his grocery in 1819 with only fourteen years.

John Walker managed to sell almost everything, even his own whisky, under the Walker’s Kilmarnock Whisky, which was surely a single or blended malt, as blended whisky was forbidden up to 1860.

In 1843, with the arrival of the railway at Kilmarnock, John and his son Alexander realize the potential of the train for their enterprise.

In 1860 they decide to use squared bottles, that remains an icon of the mark, together with the slanted johnnie walker label, that is inclined 24 degrees. Having squared bottles was good because they stock in less space and there were less broken bottles. Five years later, Alexander Walker create their first blend.

In 1908, Tom Browne, a cartoonist, created during a meal the striding man, that has become the icon of Johnnie Walker to nowadays.

More expressions were introduced, in 1920, Johnnie Walker Gold Label was created and it was a special blend given only to the most successfull directors of the brand and in 1932 Johnnie Walker Swing, a blend which bottle was specially created for ships so that the bottle would swing with the movement of the waves.

In 1934, King George V gave the Royal Warrant, one of the highest distinctions in the United Kingdom. In 1966 they obtained too the Queen’s Award for export achievement.

In 1991, they created Johnnie Walker Premier, a blend of malt and grain whiskies with many of them from closed distilleries.

In an attempt to gain the premium market they created the Johnnie Walker Blue Label, that although it is non age statement whisky, contains many old whiskies some of them from already closed distilleries.

Now, Johnnie Walker is part of Diageo, and they no longer blend the whisky at Kilmarnock. Also Diageo announced that they were moving what remained of the production out of Kilmarnock too.