This is a sample of Hammer Head

Hammer Head is a Czech single malt produced in 1989, just before the fall of the Berlin Wall, which changed forever Eastern Europe. Developed in the distillery Pradlo in western Czechoslovakia, Hammer Head is the only single malt made in Bohemia. Discovered by accident just last year by its new owners, it was designed at the time from a local barley and aged exclusively in oak Czech barrels. In terms of taste, it emanates from his frailty and his speaking youth an atmosphere full of romance ... and only 80,000 bottles are available. 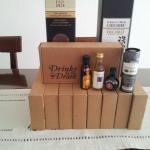 These bottles have been chosen over others because their nose, taste and finish are more similar to Hammer Head than the rest. Go to Whisky-o-matic page to fine tuning other settings.