A 16 year old, un-chillfiltered Cragganmore. This was distilled on the 8th April 1992 and aged in hogsheads 1459 and 1460 before bottling on the 15th September 2008. A release of 624 numbered bottles from Signatory. 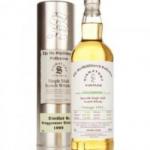 Other presentations, miniatures and samples of Cragganmore 16 year 1992 Signatory

These bottles have been chosen over others because their nose, taste and finish are more similar to Cragganmore 16 year 1992 Signatory than the rest. Go to Whisky-o-matic page to fine tuning other settings.