A special Kilchoman bottling produced specially for the 2014 Islay whisky festival, it was matured for around 5 years, initially in first-fill bourbon casks before spending a finishing period in a Fino Sherry butt. And it's good. Really very good indeed. The outturn was 525 cask strength bottles 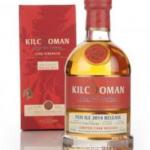 These bottles have been chosen over others because their nose, taste and finish are more similar to Kilchoman Feis Ile 2014 Release than the rest. Go to Whisky-o-matic page to fine tuning other settings.