Imperial distillery closed its doors in 1998 ending one hundred years of intermittent production of this engaging and largely unsung malt whisky. Rarely available as a single, this Speyside gem exudes some complex intensity tempered by graceful subtleties. The aromas are intriguing, giving lemon and lime zest, linseed, cocoa and fennel. The palate has a nutty, sherry bias laced with sauvignon hints leading to a creamy, sherry style finale. 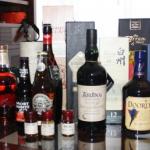