Bain's Cape Mountain Whisky – produced in Wellington and named after the man who built the first road there – has actually been on the market for the past year, but has just returned triumphant from major drinks competitions in the UK, where it took a gold medal and best-in-class citation at the 2010 International Wine and Spirits Competition and a silver at the 2010 International Spirits Competition. 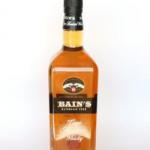 Other presentations, miniatures and samples of Bain's Cape Mountain Whisky

These bottles have been chosen over others because their nose, taste and finish are more similar to Bain's Cape Mountain Whisky than the rest. Go to Whisky-o-matic page to fine tuning other settings.