This is a sample of Mackmyra Special 02 10th anniversary

A special 10th Anniversary edition of Mackmyra, released to celebrate a successful first 10 years of distilling at the Swedish distillery. This is matured in Swedish oak as well as bourbon casks. 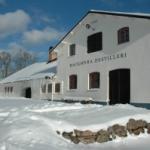 These bottles have been chosen over others because their nose, taste and finish are more similar to Mackmyra Special 02 10th anniversary than the rest. Go to Whisky-o-matic page to fine tuning other settings.