Mackmyra is the brainchild of Magnus Dandanell. It was created by him and a group of friends in 1998. 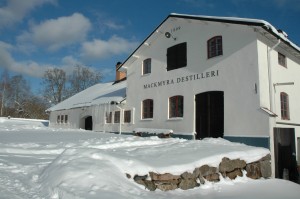 They took Scotch whisky as their inspiration but decided to create a spirit that really showed the Sweddish heritage.
So they began building their own stills and through a process of trial and error they got a spirit that satisfied them. They tried more than 150 different recipes to get the whisky they wanted, with variations in barley sorts, smoke fuel, yeast brands, length of the fermentation and, of course, adjustments of the still shape.

The investment has been around €3M and now they have more than 2000 shareholders.

In early 2002 the development process was completed and so they bought the still from Forsyth’s of Rothes in Speyside, sweddish stainless stilll washbanks and a german mash tun. All the equipment in the pilot distillery was done in scale.

They release their first whisky in 2006 with its Mackmyra Preludium 01.

An innovation from Mackmyra is Mackmyra Reserve, which consists in maturing the whisky in 30 litres casks that speed up the maturation of the spirit due to the increased wood contact.

My collection of Mackmyra