A 9 year old single cask whisky from the Laphroaig distillery. This was distilled in 1999, matured in refill sherry butt number 2301 and bottled for the Coopers Choice range in 2009 There are just 780 bottles of this. 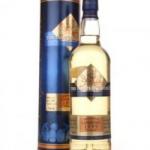 Other presentations, miniatures and samples of Laphroaig 1999 Coopers Choice

These bottles have been chosen over others because their nose, taste and finish are more similar to Laphroaig 1999 Coopers Choice than the rest. Go to Whisky-o-matic page to fine tuning other settings.