Cairdeas derives from the Gaelic for 'Friendship', this is a rare cask strength edition from the Laphroaig distillery. 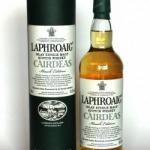 Other presentations, miniatures and samples of Laphroaig Cairdeas Ileach Edition

These bottles have been chosen over others because their nose, taste and finish are more similar to Laphroaig Cairdeas Ileach Edition than the rest. Go to Whisky-o-matic page to fine tuning other settings.