Compass Box isn’t just about whisky… and they show you it in each of their whiskies. So when I went to the Whisky Show and I saw some people wearing a sticker that says “I love smoke” that I though it was some kind of protest against smoking bans. 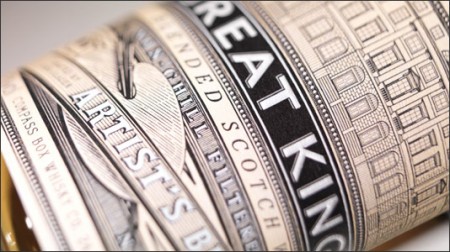 When I finally entered the show I saw the answer at the Compass Box stand, they have created two version of their Great King St. Blended whisky: one with a sherried character and the other with a smokey touch. You had to choose between them.
So let me show you both whiskies and then I tell you what I chose.

“Awesome whisky. It is lighter than Islay whiskies but still has a good amount of peat”

90
TR-06 is one of two experimental Great King Street releases from Compass Box. The idea is that one is chosen by consumers to be the second permanent release in the range. This is the smoky version, made up of 33% Lowland Grain and 67% Malt from Islay, Highlands and Speyside, of which half comes from Clynelish.

So based on other whiskies I have already tasted I rate this Compass Box Great King Street - Experimental TR-06 Blended Whisky with 90 points over 100.

“Great blended whisky slightly sherried and highly drinkable. I prefer this over the smoke version”

90
00-V4 is one of two experimental Great King Street releases from Compass Box. This is the lightly sherried option, with the concept being that consumers choose one to be a permanent edition. The'recipe' is made up of 28% Lowland Grain and 72% Malt from the Highlands and Speyside with a small percentage of peated Islay.

So based on other whiskies I have already tasted I rate this Compass Box Great King Street - Experimental 00-V4 Blended Whisky with 90 points over 100.

Did you guess it? I wasn’t able to take one over the other. Both of them were fantastic I usually love peated whiskies but this time I prefered just a little bit the sherried version over the smokey one.