Damn postal service! Alembic Communications invited me to #Balblair whisky tasting at May, 2nd but unfortunately the parcel didn’t arrive in time as May, 1st is holiday on Spain. 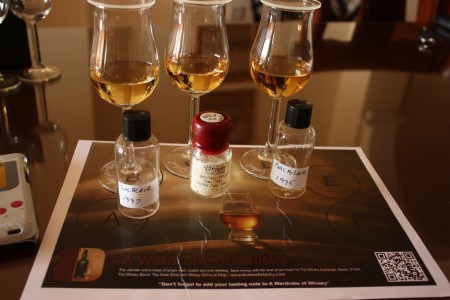 So here I am on my own tasting. #Balblair tasting was composed of three drams: Balblair 1997 2nd edition, Balblair 1990 Peated Cask sold in exclusive by Master of Malt and Balblair 1975.

First dram of the night is this 15 years old Balblair with a lovely fruity and sweet character. It is that kind of drams that conquer you sip by sip. First one you think it isn’t bad, next one it is good, next is very good and after a few more you wonder where it has been all this time.
This second release has been aged in refill american oak bourbon casks and bottled at 46% ABV.

“Gorgeous whisky! It reminds me so much of anCnoc. A great whisky. Thumbs up!”

Palate (92): powerful, oily. honey, citrus, vanilla, spices, pears. Quite quite interesting... what the hell! I love this!.

This is the closest you will get to a peated Balblair. It is the result of having Balblair to mature in oak casks used previously to mature Islay whisky. By how the Balblair tastes I bet it was Laphroaig. It is way more medicinal that peated.
Bottled from a single cask in 2013, that’s 23 year so, from an american oak bourbon cask used to mature an anonymous Islay whisky.

“Was this whisky aged in a Laphroaig cask? It is too medicinal for my taste”

This is one of the oldest Balblair whiskies I have tasted. Aged for a whopping 37 years in a fino sherry cask made of american oak.

“The delicious sweetness of younger Balblair whiskies turns into a slightly drier dram on this incredibly old whisky.”

Impressive panel of whiskies. I have to say that my favourite has been the 1997 Balblair over the other two, lovely sweet and fruity with spices. I will buy one of this for sure.

The Peated Cask Balblair was a cool “experiment” that I wanted to taste. I tasted a similar whisky from The Balvenie and I didn’t enjoyed it much. Here is the same, I love peated whiskies but the peat here has turned into something iodine and medicinal that isn’t very pleasant for my taste.

About the 1975, it is impressive old and shows notes of its age but at the same time showing off about Balblair fruity notes. Nice one but still prefer the sincere fruity sweetness of the younger Balblair.