Well, here it is… my first Absinthe tasting. I have had the samples around in the box for two years where they have been improving due to bottle maturation… well, not really… I am a lazy ass and I didn’t want to drink absinthe when I could be drinking a 40 years old malt whisky. #truth

But a few weeks ago Billy Abbot, Richard Barr and I were having a “passionate” chat about the qualities of Jim Murray as whisky taster and his Liquid Gold Award ( and 96.5 score ) for Johnnie Walker Black Label, yep, that very same whisky.

At first we were just talking about if the score was good or it was bad ( and I think that it is crazy ). I reckon that I usually score whiskies between 85-93 with very few bottles outside that range as I explain here.
Personally I think a score-less review is like a way of cheating you, the reader of this blog, of saying that I am not sure that I want to say the whisky is bad because I will lose something ( free samples anyone?! ).

I can understand that there are people out there that don’t score whiskies. Perfect. But in whatever way you do, you must mentally sort your whiskies… with a number, with a color, with stars… but it is hard ( for me ) to believe that a bad whisky and a good whisky can live one next to the other.

And so here the conversation started to get mad ( I even read about the quality of Black Label as a whisky not as a windows cleaner )… and finally it ended in Absinthe. ( Take that one Godwin! ). So I remembered about the poor absinthe samples that I had here and planned myself a tasting. And as a extra a Black Label review :) 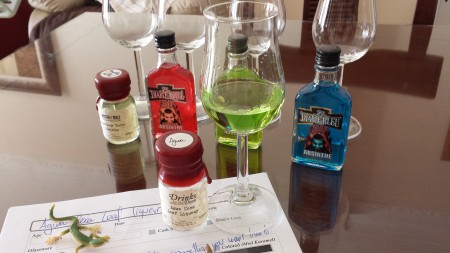 So here are the whiskies… err… absinthes…

What?! A Absinthe tasting and you start with other liqueur?! Well… I had this sample on the box for a while and I didn’t know what else mix it with… so what better that another stuff I have no clue about how it tastes…

Particularly, I bought a bottle of this Coca liqueur a few years ago because it was really curious. Just keep in mind that coca leaf isn’t cocaine. Also it looks like that the coca leaf used on this beverage has had their psycotropic components removed. Booooo!

“Sniiiifff! Much like a decent tequila with a ton of sugar. More hype that other thing... WTF! Did you see that red dragon?!”

76
Agwa de Bolivia, which is considered to be the world's first and only spirit derived from coca leaf. The translucent green liqueur is delicious and needs little else but some fresh lime juice and a couple of ice cubes, if you prefer it chilled (see the gallery below for cocktail recipes featuring AGWA de Bolivia).

AGWA contains guarana, an extract from the seeds of Paullina Cupana (which contains caffeine); ginseng (a stimulant); and approximately 40 grams of coca leaf in every bottle.

So based on other whiskies I have already tasted I rate this Agwa de Bolivia Coca Leaf Liqueur with 76 points over 100.

Save money when you buy Liqueur online. Check for the best prices from best online shops below:

Not sure I would recommend you this. I really go and get a proper Tequila and add some sugar to it… pretty much the same experience. With much less hype on the other hand.

Now a range of Spanish Absinthes that have been in my samples box for too much time. I think it is the same recipe with different colors and alcohol contents, with the blue raising to a whooping 80% ABV. #scary

So based on other whiskies I have already tasted I rate this Le Diable Rouge with 69 points over 100.

“Anise and alcohol... lots of alcohol”

So based on other whiskies I have already tasted I rate this Les Diable Vert with 68 points over 100.

“I want this to end! I can't stand it! Someone finish me! Who though about bottling this stuff at 80%?!”

Nose (65): more than average. citrus, anise, herbs, sugar. It is really unpleasant to nose because of the alcohol

So based on other whiskies I have already tasted I rate this Le Diable Bleu with 68 points over 100.

“Woo! Wooo! This is strong! Everything is so fuzzy”

72
70cl / 68% - An authentic'verte' Swiss absinthe made using 12 plants including angelica & grande wormwood. They, controversially, use grande wormwood in the post distillation maceration, giving a vivid natural green colour and a digestif bitterness.

So based on other whiskies I have already tasted I rate this Angelique Verte Suisse Absinthe with 72 points over 100.

Well… you can’t say I didn’t try it but really I don’t like Absinthe. I find the alcohol content too aggressive, even dangerous. And overall too much anise. In Spain it is very typical to drink Anis del Mono straight or with a bit of water. It is sweeter and with even more anise that absinthe… and well, it isn’t neither my kind of drink.

Sorry but you won’t see A Wardrobe of Absinthe anytime soon :P