A Laphroaig Cask Strength 10 years old matured for one month on a small four litres cask that contained Oloroso sherry. 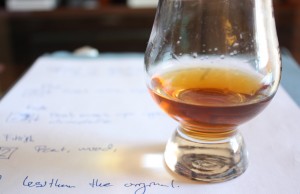 I have matured this cask strength Laphroaig for one month on a 4 litres american oak cask that has contained oloroso sherry for 4 months.
Initially I had in mind maturing it for a few years but someone advised me against the idea because most of the whisky will evaporate and explained me that typical maturation periods for these small casks are within months.

It is really worse than the original cask strength Laphroaig, the sherry took too much influence on the whisky.

The whisky isn’t bad, but the original peat punch of Laphroaig isn’t there anymore. It is still peated a lot, but as someone said, peat and sherry doesn’t do good friends. Each of them is cancelling the other.

Anyone wants 2 bottles of this? :)

I am thinking about breaking now a Macallan in a Moscatel Sherry cask :D