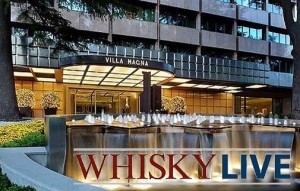 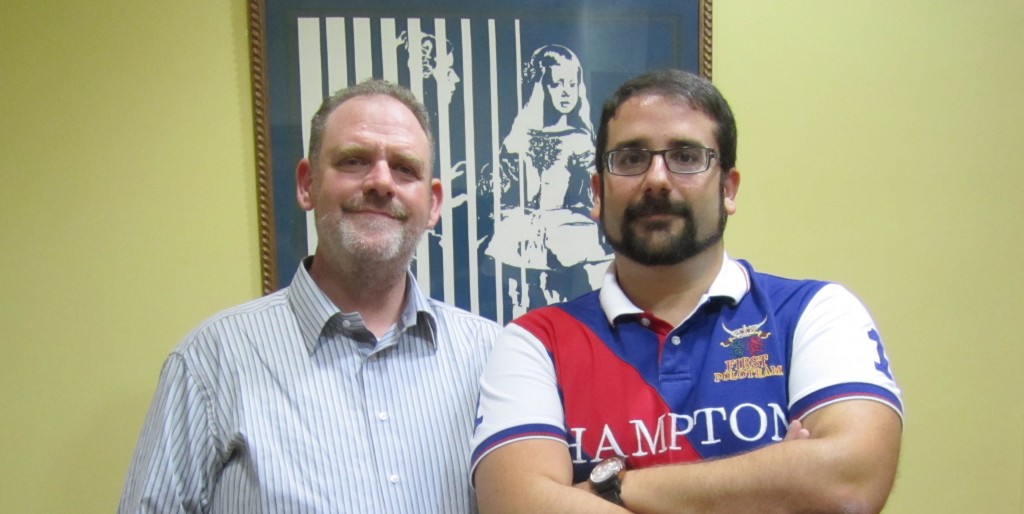 Masterclass: Effects of wood in whisky 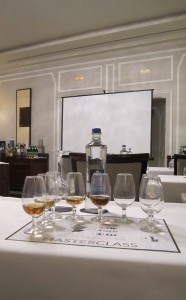 It was a really interesting and friendly experience as we were alone with Dominic.
He presented us five single malts to taste: Auchestoshan 12 years, Macallan Fine Oak 12 years, Compass Box The Spice tree, Suntory Yamazaki 12 years and Woodford Reserve Distiller’s Select.

It was a great experience to see how much the wood impact on the final flavour of the whisky and although I have tasted most of them, it was quite fun to taste one after the other and to see how more relevant the wood finishes became.
I never saw the Spice tree so spicy nor the Yamazaki with so many pepper.

Even I was able to follow the whole masterclass in English of which I am really proud!. Me, who is from Spain, understanding English! :S

I couldn’t leave without a photo with Dominic :)

As we entered directly into the masterclass, this was the first time I saw the show itself. I was expecting something to the level of the organization or the webpage of whiskylive, that is, horrible and I found a really cool show. I have been told that this year show have been smaller but I wasn’t able to taste everything I wanted in five hours, so for me the size was fine ( or the time for spending was too short ).

So our first stop, Richard and I spend the day together, was Destilerias Liber. 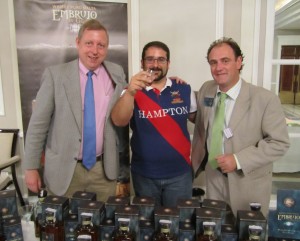 Embrujo de Granada is a single malt whisky done by destilerias Liber at Granada, Spain, using barley grown in Granada and water from Sierra Nevada. I met there the distillery manager, Fran Peregrina, and Emilio Juarez, the business director of the brand, both of them really nice friendly persons who explained us most of the process.

They are doing a great job on Embrujo de Granada. This whisky is really floral and aged in Pedro Ximenez (PX) casks from Jerez. This kind of casks impart a deep raisins and cocoa flavor to the whisky but that doesn’t hide the floral complexity it has. I have tried it a 3.5 years and the new batch is aged at almost 6 years old, although all bottles are no age statement.

I think it is a very interesting whisky, which remind me of Mackmyra and Richard said that it was the best surprise of the whiskylive show.

Looking to the show and the watch we decided to move again to the next stand. Five hours are not really enough!.
As I wanted to show my guest how Spaniard does whisky we move to DYC stand.

DYC is the most important whisky distillery in Spain and it is located in Palazuelos de Eresma in Segovia. They create a cheap blend for mixing and a pure malt with whisky from Scotland. Lately they have added to their range a limited edition single malt whisky aged in bourbon casks.

They had on the show their full range: DYC Blended, DYC 8 ańos, DYC Pure Malt and DYC Coleccion Barricas. I suggested trying the pure malt and the single malt. Both were rather good, and I would say that the single malt is really good. The pure malt was sweeter with a flavor more suitable for mixing or drinking it on the rocks. 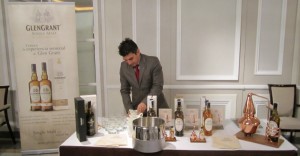 The guy on the stand seemed to be working hard, on something else that the whiskyshow I mean.
So we moved to another more friendly place. 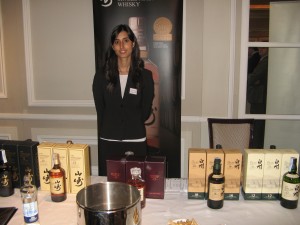 Time to move again!. WHOOOPS! Look at that! Japanese whisky! They had on the stand some whiskies from Suntory: Yamazaki 12 and 18 years, Hibiki 17 years and Hakushu 12 and 18 years.
As I love peaty whiskies I launched myself for a dram of Hakushu 12 years old and 18 years old, smoky, a bit peaty but not a peat monster. Really interesting whiskies.

We nosed the Hibiki 17 years old but we wasn’t able to tasted it because the bottle was not for tasting ( what the hell?! So why did you take the bottle to the show?! )

As we have just tasted Yamazaki 12 years and I have a sample of 18 years at home we move to next stand. 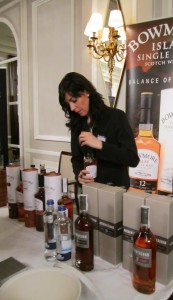 As I have tasted the Bowmore and have a sample of Three woods we went straight to try Glen Garioch ( pronouced Glen Geery ).

The Founders Reserve was really good but we both agree that we like more 12 years old although they show different whisky profiles.

I could not move of the stand looking at that beauty! hey! not that! I am married! I mean that Bowmore Darkest, such wonderful color. It was a pity we had so little time. 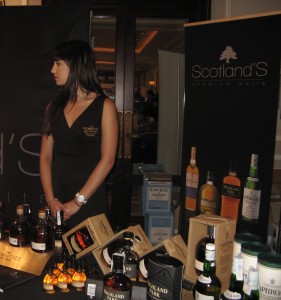 As I have already tasted the two first and Richard wasn’t fond of Glenrothes we moved.
Later I found that they also had Macallan 15 years old to taste. A pity. 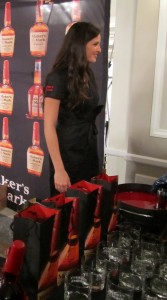 They had a good show there with even cocktails.

We got a sample of Maker Mark’s and went directly to where most people was… a hot cauldron full of red wax. You can take a glass or a mixer and put it inside the cauldron so it would get the characteristical Maker’s Mark’s red wax border.

As there were no more mixers we take a glass. I will be careful washing this one. Really pretty girls on the stand also :) 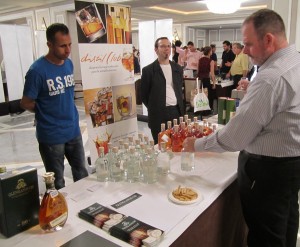 They have there the two bottlings of new make: white and finished in Californian red wine. They also had a bottle of the 26 years old decanter that wasn’t for tasting neither.

The newmake had lots of floral and fruity notes with all the freshness of newmake. It was an interesting experience to taste it but I didn’t like it ( sorry pals ). It reminded me of the holandas from Gonzalez Byass brandy that I nosed at Jerez or Grappa from Italy just that more floral and fruity.

I tried also Edradour Caledonia, a good smoky highlands dram. I enjoyed it 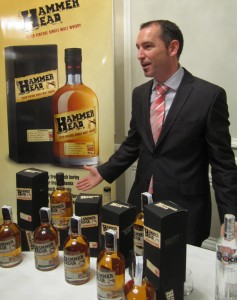 We landed from Glenglassaugh into Hammerhead. A czech whisky from Pradlo distillery that it is no longer produced.

The actual and only batch is what is was left on the distillery after the Soviet Union collapsed. It is a really interesting dram made everything using Czech local products: barley, water, yeast and czech oaks.

The whisky, that is 20 years old, was rather good, quite floral, citric. I like it a lot even if I am not a fan of floral drams.

An so we saw it… on a private tasting table, around the center of the table, a bottle of Shacklenton whisky. The replica that the nose itself created after tasting the original. They also had there St George Royal Wedding, Teerenpeli finish whisky, Hudson Rye, Three Ships South Africa whisky, oh my god!… so many drams I wanted to taste.

Unfortunatelly the only way to taste them was to kill all the attendants wait for the actual persons doing the taste to finish. So I had a hard time choosing, well, not really. It was this or the Macallan masterclass to taste Macallan 25 years old and Macallan 30 years old.

It was a no brainer decision :)

So after talking with Richard we decided to move with our saddest, more disconsolate poker face, looking that the tasting organizer… who kindly rewarded our role with two drams of Mackinlay’s Shacklenton whisky. Stunning stuff. It is exciting to taste history. Yay!

We had still 15 minutes before Macallan masterclass so we decided to see the most we can of the show before the masterclass. 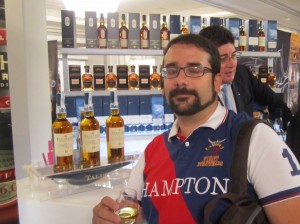 At my request, Richard tasted Cardhu Special Cask Reserve so he can explain the world that although Cardhu 12 years old is a really weak malt this special cask reserve is stunning. I took a dram of Talisker 10 years old. Richard agree that SCR was a hell better than 12 years old.
I enjoyed meanwhile my Talisker, more smoky than peaty, without hurry. 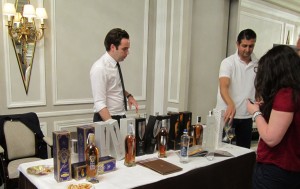 Next stop Smokehead stand. Only five minutes to the tasting of tasting!.
They had there Smokehead, of which I have a sample and Six Isles, a blended malt with whisky from six scotland producing whisky isles.

I liked it so much I have order a bottle. I find the idea romantic and interesting. Malts from Islay, Sky, Mull, Orkney, Jura and Arran. Overall peaty, citrus, floral, smoky. Really awesome. 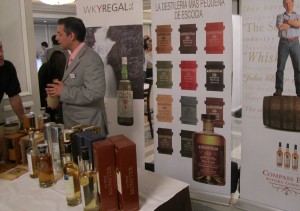 In this stand they had several Compass box bottlings, Edradour and a signatory Laphroaig Vintage 2000. Richard choose Asyla and I went straight for the Laphroaig, that was you know, very Laphroaig. 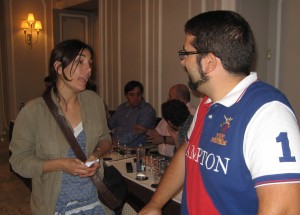 Hey! Hurry up! It is eight o’clock. The masterclass is going to start.

Isabel, the person who invited me and Richard to the masterclass came to say hi. I felt really unpolite for not having thanked her first after arriving to the show, but you know so much whisky and so little time.

We had some words with the brand ambassador, Luis Serrano, before the masterclass which was divided in two parts.

We sited down and then we saw it: the tasting chart.
But let’s explain the first part where Luis spoke about the process of creating whisky, from the barley stage to the ageing in casks, passing by malt, wort, beer, low wines, spirit, casks. Quite interesting. 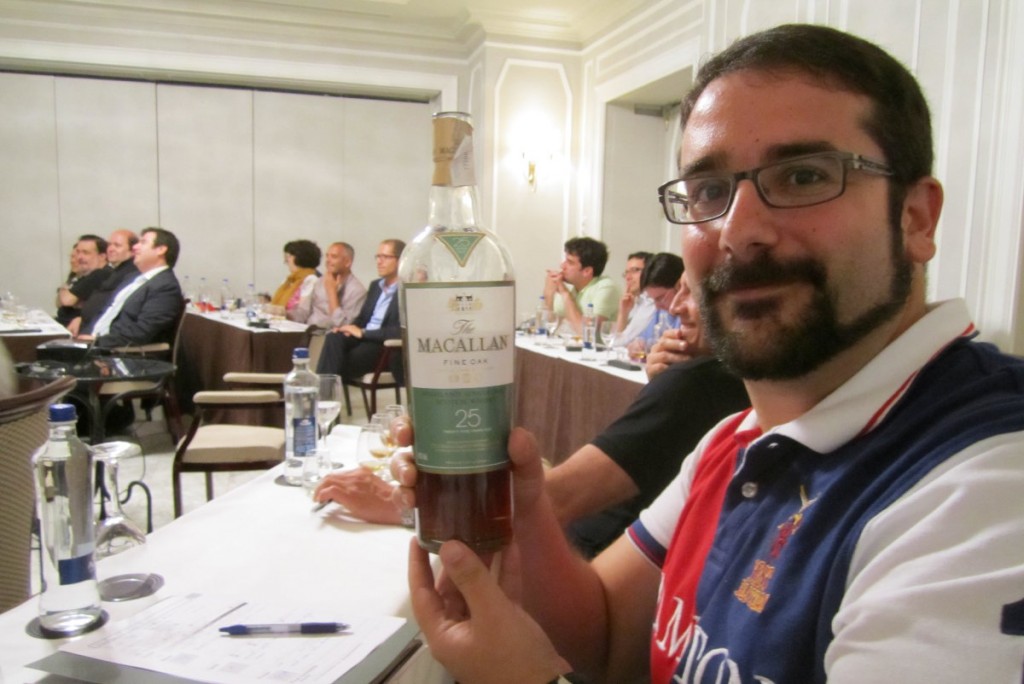 The tasting was guided and listen to really interesting ideas about what people found on the dram.
Again it is a unique experience to travel along the whisky ageing process of such great distillery as Macallan.

Just for this alone the travel to Madrid was really worth it. I can be thankfull enough for having been invited to such great masterclass. 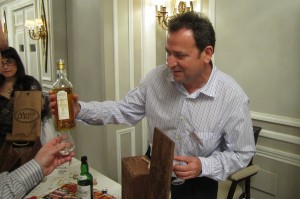 We hurried back to the show as it was due to close at half-past nine and it was almost that time.
On Whiskybarn we tasted a Glenrothes 1999 by Murray McDavid. It was really interesting to pair it with chocolate chips.

We had a last dram at Embrujo de Granada stand and they were very kind to give us a bottle of their whisky so we can try it at home. Many thanks. 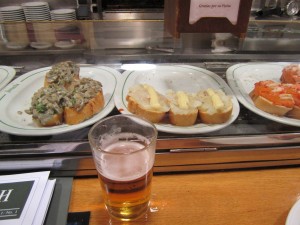 I told Richard that he couldn’t leave Spain without having proper beer and tapas. So we walked around until we found a suitable place with great pintxos.

It was a cool reward after all the day travelling and walking on the show, taking notes, making photos, tasting whisky and after all that, just cold beer and a friend.

Back to the hotel

We said each other Goodbye and I went to the room to see what the show have been about.
I felt like Alibaba in Alibaba and the forty thieves: I got many many samples to taste at home.

I am really happy about the Whiskylive event at Madrid because I spend a great evening at the show with a new friend, Richard Barr, doing what we like most, almost, drinking whisky. A great day shared with a great fellow.