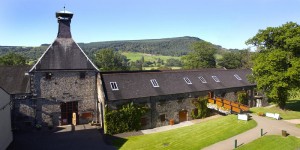 Dewar was founded in 1846 by John Dewar as a small wine and spirits merchant shop in Perth, Scotland. Today Dewar’s is the fifth largest blended whisky brand in the world.

John Dewar’s sons, John Alexander and Thomas, founded Aberfeldy distillery in 1898. Aberfeldy is the malt that lies in every Dewar’s blend.
By the end of 1900s Dewar received the Royal Warrant and have a growing business in the USA, opening its first office in Beaker Street, New York.

After Prohibition, Dewar expansion continued in Europe with the acquisition of Ord, Parkmore, Pulteny and Aultmore.
In 1925 Dewars, Buchanans and Johnnie Walker joined the Distillers Company Ltd. Now it is part of Diageo.