True artisan hand made farm whisky. Like whisky used to be done.

Kilchoman established in 2005, is a farm distillery and the first to be built on Islay for 124 years. Kilchoman gives everyone the opportunity to see all that is best in the grass-roots traditions of malt whisky distilling – from barley to bottle. 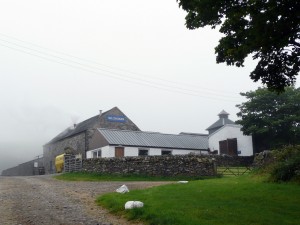 Kilchoman is one of the smallest distilleries in Scotland with an annual production of 100,000 litres of alcohol. It is one of only six distilleries to carry out traditional floor maltings, but the key difference at Kilchoman is that the barley is grown on the farm at the distillery, whereas other distilleries purchase barley from around the country or even from other countries, as it is not a requisite that scotch whisky to be done with scotch barley.

John Mac Lellan, General Manager, has over 21 years experience working in the distilling industry and prior to joining Kilchoman he worked for almost 21 years at Bunnahabhain Distillery. He started at Bunnahabhain as a mashman in 1989 and became distillery brewer in 1993 before taking over as distillery manager in 1997. 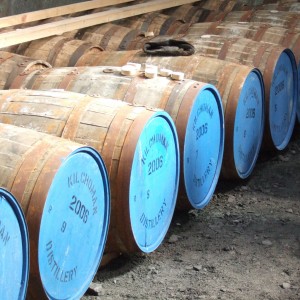 100 tonnes of malting barley is grown and malted at the distillery. This represents 30% of Kilchoman annual production. The balance of malt is purchased from the Port Ellen Maltings on the island.
The two malts are kept separate through the production process and when mature they will release two expressions of Kilchoman Single Malt.

Kilchoman is one of only six distilleries in Scotland (three of these are on Islay – Bowmore and Laphroaig are the others) that still malts its barley on its own floor at the distillery.The majority of distilleries purchase their malt requirements from a commercial maltings.

80% of Kilchoman annual production is filled into a combination of fresh bourbon barrels from Buffalo Trace Distillery, Kentucky and refill casks and 20% into fresh oloroso sherry butts.

Some Kilchomans from my collection