Paul Newman made a lot of money in The Color of the Money selling Wild Turkey. 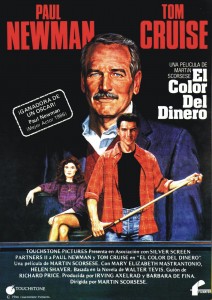 In The Color of the Money, Paul Newman, a pool hustler Eddie Felson finds the young, promising pool player Vincent, Tom Cruise, in a local bar and he sees in him a younger version of himself.
To try and make it as in the old days, Eddie offers to teach Vincent how to be a hustler.
After some hesitations Vincent accepts and Eddie takes him and Vincent’s girlfriend Carmen on a tour through the country to work the pool halls.
However, Vincent’s tendency to show off his talent and by doing so warning off the players and losing money, soon leads to a confrontation with Eddie. In the film Newman shows off about making money selling the awesome Wild Turkey. What car would he have been driven if he would have known about George T Stagg?