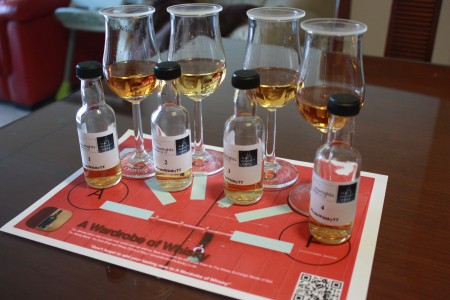 This first sample has an amazing nose but the palate slips into the cheap side of life.

“A great nose but a very mean palate. Maybe it is a young grain whisky and looks like bottle at around 40%. No idea what it can be”

85
70cl / 40% - A single grain whisky from Scotland's largest distillery, Cameronbridge. Grain whisky is unpeated and lighter in style, allowing the oaky flavours acquired during maturation to come through.

So based on other whiskies I have already tasted I rate this Cameron Brig Single Grain Whisky with 85 points over 100.

Well, you can’t ask much more for that price. It is better that most blended stuff out there and for around the same price.

This one is slightly better but still persists a mean whisky profile. No clue what it can be, so much tropical fruits on this one…

Hell! Someone guessed it. I didn’t remember Greenore with so much tropical fruits but who knows… :)

Now we are talking! This is grade A stuff!.

“Incredible stuff! Smells old and bottled at a generous strength. Simply awesome... but no clue about what I am tasting, maybe Clan Denny dram?”

90
A release of grain whisky from Japan's Nikka, produced mainly from corn using one of their continuous Coffey stills. Rather than the rare and limited releases they have done before, this is a larger release to further show off this key component in the Nikka family of whiskies.

So based on other whiskies I have already tasted I rate this Nikka Coffey Grain Whisky Japanese Grain Whisky with 90 points over 100.

Oh my! This is simply fantastic! I have a bottle of this one but never opened it. Had I known it was so good I would have done before. This Nikka Grain Whisky is awesome and now I can see why Taketsuru whiskies are so good!

Respect! This dram exudes age, solera, class… and what the fuck! peat! Peat! PEAT! This grain whisky has a nice touch of peat on it taste! Glorious crazyness!

“Impressive whisky! First grain whisky with a touch of peat that I taste. It feels like something quite unique... and old”

91
A long aged grain whisky from Invergordon, distilled in England's last great year at the World Cup and bottled in 2011 by Clan Denny.

Muahahaha! Awesome! Not the best Clan Denny I have had but still so spectacular… and peated! I can’t believe I am tasting a slightly peated grain whisky. Cool!

A great event, as usual. I have to say that I quite enjoy Steve’s Tweet Tastings and the fact that this was blind made it even more fun. Really it takes totally the stress out of rating whiskies…

My night favorites are the Invergordon and the Nikka. And definitively I will go and buy another Nikka Coffey just to show friends how good a grain whisky can be.