One of my readers asked me what I thought about Jack Daniel’s range. Eh! Wait, don’t reply yet. Let me write the article! 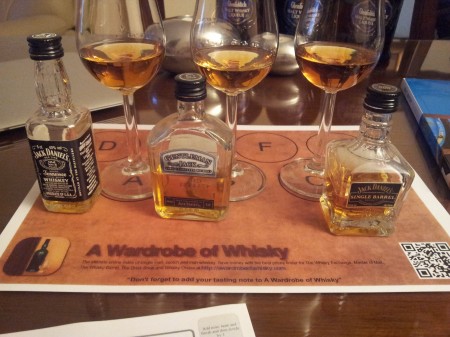 The answer was easy but I decided to take the hard way and actually taste the whiskey.

The short conclusion is that Jack Daniel’s whiskeys isn’t as bad as you think. Sponsored reply. Just joking, the stuff is a bit below the mean bourbon scores and slightly overpriced, but as I said whiskeys as the Jack Daniel’s Single barrel are in fact a nice experience.

“Not as bad as I remember. Blind tasting it I would have said that it was a fair bourbon with a weak nose.”

Nose (83): more than average. corn, spices, honey, floral, vanilla. Slightly alcoholic nose. Not unpleasant but it is there.

So based on other whiskies I have already tasted I rate this Jack Daniel's Tennesse Whiskey with 84 points over 100.

“Slightly less powerful than Jack Daniel's. It is more fruity and spicy”

83
This is a softer, more round, Jack Daniel's whiskey, that is the direct result of charcoal-mellowing the whiskey twice, before and after the aging process.

It is more expensive that the standard Jack Daniel, so my suggestion is that if you love this, you should taste something like Blanton's Single Barrel

So based on other whiskies I have already tasted I rate this Gentleman Jack with 83 points over 100.

“Without being a great bourbon, this whiskey is by far the best option in the Jack Daniel's range”

86
Jack Daniel's Single Barrel is always found in the upper most parts of the barrelhouse - they like to call this the 'Penthouse'. Because every barrel is different and in various locations in the barrel houses no two barrels are the same. Those barrels usually portrait the best and most intense flavors of toasted oak, vanilla and caramel.

This Jack Daniel's whiskey is a hell better than the standard Jack Daniels bottling but the price step is quite important to dismiss it. I recommend you to give a try to something like Buffalo Trace so you see what you are drinking.

So based on other whiskies I have already tasted I rate this Jack Daniel's Single Barrel with 86 points over 100.