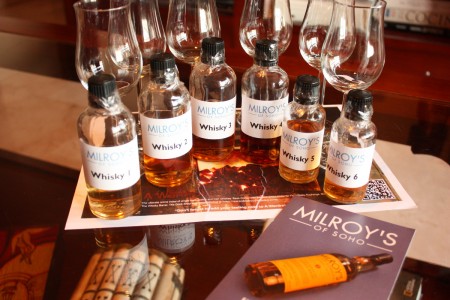 So based on other whiskies I have already tasted I rate this Milroys Finest Blended Malt with 85 points over 100.

“Nice whisky with all the DNA of a Speysider: floral, honey and oranges. Good malt”

So based on other whiskies I have already tasted I rate this Glen Elgin 17 years old Milroys with 87 points over 100.

“Lovely notes of tropical fruits. Could it be a Connemara? Really good whisky whatever it is”

“Lovely sherry monster. It is like a tamed huge beast. Very nice”

So based on other whiskies I have already tasted I rate this Millstone 14 years old Milroys Single Cask with 91 points over 100.

“It has a great nose but the taste is a bit light. A pity because it was promising”

So based on other whiskies I have already tasted I rate this Milroys Single Cask Peated Malt 5 years old with 89 points over 100.

“Maybe a Littlemill? It is floral, vibrant, yet I know it is old. And it is bottled at high strength. Not exactly my kind of dram but quite nice”

So based on other whiskies I have already tasted I rate this Glen Garioch 1978 Single Cask Milroys with 88 points over 100.

Surprising! My favorites on this tasting has been the great Millstone 14 years old and Zuidam Rye Single Cask. We also tasted a very old Glen Garioch 1978 ( my year! ) that although it was quite good, it wasn’t my kind of dram… too floral.