During the last WhiskyLive Madrid, Fran Peregrina invited me to visit Destilerías Liber, a small malt whisky distillery that are responsible for the first single malt spanish whisky that it is born just under Sierra Nevada in Granada, Andalucía. 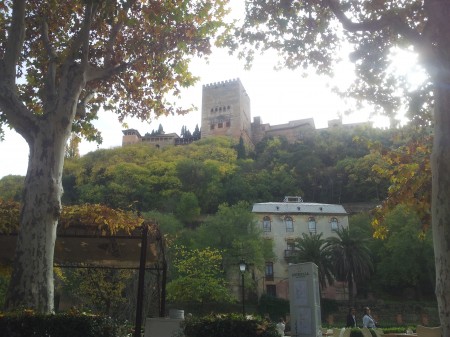 A few weeks ago I found a free work day and I decided to visit Granada and visit the distillery that it is just ten minutes far from Granada. They accept visits with a booking at info@destileriasliber.com.

So this was my experience there.

It is relatively easy to find the distillery, just drive to Padul and drive through the exit 144 and then just a few kilometers more before you turn to the left and there it is.

When I arrived to Destilerías Liber, Fran Peregrina, the manager and soul of the distillery was already there. Mr. Peregrina is chemical ingenier but a master distiller at his core.

The distillery lacks of the romantic look that some Scottish distilleries have. It is located in a industrial area on the outskirts of Padul, a small town near Granada. The distillery have inside all the needed equipment: mill, wash tuns, stills, bottling plant and warehouse. Right now, due mainly to the huge drop on malt whisky demand in Spain, the distillery is doing a great investment in developing new brands of Gin, with a huge success if you ask me.

But let’s keep this centered on whisky, this is how the distillery works.

There is no room for a malting in the distillery so they obtain the malt from Albacete. When they are going to distill they order several trucks of malted barley and it is loaded in a “torba”. Using a tube with a “tornillo sin fin” the malted barley is elevated to a depot from were it is milled so that is is easier to solute it in water later.

The disolution happens in the wash tun, where the milled malted barley have hot water added. They use a 10,000 litres tun. The disolution process takes around six hours in which water gets sugars and flavours of the malt, giving as a result a liquid called wort

This hot liquid is filtered to remove solid undisolved rest of barley which is used to feed the catle. That’s is one of the reasons of many Scotch distilleries to be born as farms, the other reason is something related to taxes :).

Wort is really hot and sweet but lack yet of any alcohol.
So first if has to ferment, so in order for the yeast to survive the liquid need to cool down and then it has yeast added inside the fermentation tank where it is left working during three days under the careful control of the team so that temperature is correct all along the process.

After that’s three days the fermentation has finished and we had in the fermentation tank a sweet liquid with an small amount of alcohol similar in some way to beer. Now it is time to distill it.

As most Scotch distilleries, Destilerias Liber use a double distillation system.

The stills, completely made in Spain and designed by Fran Peregrina himself, are made of copper and has a capacity of 8,000 and 2,500 litres. As I was telling you, the first still is filled with the liquid result of the fermentation and is heated using a termal oil coil.

During all the day, the liquid inside the still is heated and begin evaporing. As you can see in any bottle, alcohol evaporate at a lower temperature than water, so very slow the alcohol inside the first still evaporate and raise into the still’s neck and descend into the worm coils that cool it down and turn it into a liquid again that ranges between 40% ABV to 8% ABV at the end of the first distillation.

All this liquid is send to the second still, where a more careful distillation takes place. This second still heated too using hot oil coils contains up to 2,500 litres which are distilled during all the day. As this liquid get hot it evaporates and it is cool down in the same way than the first still but this time it is send to an storage tank where the cut takes place using a set of switches. Something similar to the Scotch safe boxes that exists on all the distilleries.

The distilled alcohol has mainly three parts:
First part is the head or foreshots and it must be discarted because it is mainly methanol that is really harmful for your health.

Second part is the body that is the good drinkable part of the distillation.

Finally the last part is the feints or tails and although it won’t hurt your liver it doesn’t give a good flavor to whisky, so usually it is discarted too.

So after a hard long day they have a tank of 800 litres with spirit at 61% alc. vol. Hey! Wasn’t whisky aged in casks? Sure, totally right, but you won’t believe how tight is the control that the Taxes Bureau has over distillers in Spain. Until an inspector of the AEAT, Spain’s Tax agency, arrives at the distillery and measure the amount of distilled alcohol they can’t not move the spirit inside the tank to casks in the warehouse.

The warehouse, located under the distillery, is organized using the sherry style, with casks arranged like in a solera. From the tank above the whisky is pumped into the casks below and left there to mature. Usually a single distillation run gives as result one and a half cask.

Right now the distillery is maturing all their whisky in Pedro Ximenez oak cask from Jerez. These old casks had had sherry wine for maturation for years before being destined to age whisky.

At the time of writting, the distillery has several casks of 8 years old whisky that are going to be used on a new bottle to come on following years.

At last, the whisky is bottled on the distillery too, so for this task they take the whisky backt to bottle tank where it is chill-filtered and watered down to 40% ABV. From there, it is bottled and labeled semiautomatically.

In this way, after several years and a week it is created the first spanish single malt whisky: Embrujo de Granada.

Talking with Fran about the actual crisis that Spain is living, he says me that actually they are having a very hard time selling single malt whisky in Spain with drops of about 90% in sales on many supermarkets brands. They are having on the other hand a decent venture selling Gin.

You know that they say… what it is bad for business it is good for whisky. Lots of stock aging right now. You can buy whisky directly to the distillery in case you are interested.

Fran give me some bottles to try at home and write my humble opinion about them: a rum, a gin and the splendid Embrujo de Granada.

So let’s begin the work.

“Very nice and enjoyable gin bottled at 42.5% alc. vol. with a herbal profile”

80
A gin created by Destilerias Liber using several botanicals as juniper, rosemary, thyme, citrus peel up to a total of 12 different herbs.

Light and fresh, this gin is perfect for the hot nights of the Spanish summer.


This dram has a white-like color.

“Nose aromas are nice but the flavor is flawed with a burnt sugar taste. Anyway for a rum of its price range it is decent enough.”

80
A rum created at Destilerias Liber blending Guyana, Caribbean and Spanish rums from the tropical coast of Granada.

Nice aroma and a sensible option given its price.

So based on other whiskies I have already tasted I rate this El Mamut Ron with 80 points over 100.

86
A great Spanish whisky ellaborated at Granada, just under Sierra Nevada using their fabulous water supplies and the best Spanish barley. Then this dark tawny whisky is aged for years in Pedro Ximenez cask from Jerez giving the result of a dark, sweet whisky with lots of raisins and cocoa. It is very floral.

So based on other whiskies I have already tasted I rate this Embrujo de Granada with 86 points over 100.

You can perceive how the whisky has matured and developed new aromas. If it keeps the current maturation path this whisky is going to be sensational in just two or three years more.

I have had a great weekend and the visit to this small distillery has been really exciting. About the stuff I have tasted the overall impression has been really nice. I have really enjoyed to see how the whisky is developing.
I am not really a gin drinker, but this one is really nice and deserves a higher better exposure. Really well crafted Gin.