Jura Distillery is making its 50th anniversary of its reopening this year. So they decided to do an awesome tweet tasting with fifty bloggers from all around the world and organized by Steve Rush from The Whisky Wire.

I have been a big fan of Jura since I rediscovered their sherried whiskies a few years ago. In each of them you can feel the great nose of Mr Richard Paterson. Great whiskies they are in fact.

So who of you would say no to a tasting of five Jura whiskies? Not me really. 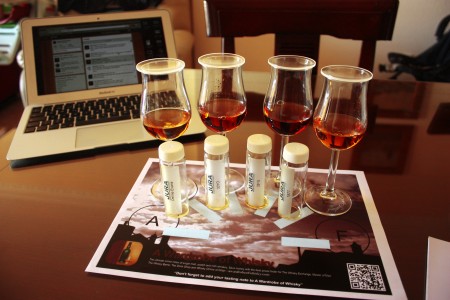 On the way from Scotland to home one of the samples got broken. RIP dear friend.
I have to say that I had already tasted the 30 years old Camas An Staca and I was quite happy about it. But about the rest I have no clue about what we were drinking.

This one was the first dram of the night. And I haven’t tasted it. I really wanted to give this one a try because it is a new addition to the Jura range for Travel Retail by now.
This Jura Turas Mara, which means Long Journey is a single malt whisky aged in Bourbon casks, Spanish Sherry casks, French Oak casks and Portuguese Port pipes. As you see quite a voyage.
People said good things about it. Now definitively I want to taste it.

92
A terrifying 30 year old whisky from Jura. The name 'Camas an Staca' translates to be simply 'Standing Stone' and refers to one of the 8 ancient stones dotted about the island of Jura.

The whisky has been matured in American oak for 27 years before being finishing in Gonzalez Byass Oloroso butts for 3 years before bottling at 44% ABV. This whisky is quite an experience in itself.

So based on other whiskies I have already tasted I rate this Isle of Jura 30 Year Old with 92 points over 100.

Named after a tree that used to cover the isle of Jura, this single malt whisky has been aged in bourbon casks for all its maturation to be finished then for 12 months in ruby Port pipes.

“Magnifique! A real outstanding whisky but with that pricetag I am not sure I will buy it ( in fact I am pretty sure! )”

So based on other whiskies I have already tasted I rate this Isle of Jura 1977 'Juar' with 92 points over 100.

This single malt was released in 2007 and only 757 bottles where created of it. They were launched to celebrate Delme Evans, the person responsible of the stills introduced in the new Jura almost 50 years ago. It is a whisky aged in american white oak and the finished in a oloroso butt.
It looks like it was distilled in 1988 and bottled in 2007 at a whooping 60% ABV.

So based on other whiskies I have already tasted I rate this Isle of Jura 1988 / Delme-Evans Select with 92 points over 100.

Just like that. I had no idea what it was but during the tweet tasting we were revealed that this is a preview of a whisky that Jura plans to launch during 2014, their new flagship: Jura 40 years old. So 39 and 3/4 is the age of the whisky. Respect.

So based on other whiskies I have already tasted I rate this Jura 39 3/4 years old with 92 points over 100.

Usually it is a pleasure to taste along Steve on his Tweet Tasting but this time it has been a real honor. What an awesome panel of whiskies Jura has presented. So a gazillion thanks to Jura and Steve for making this possible.

Then, my favorite… well… this kind of tastings make so hard to choose one. I would say my favorite is the 40 years old whisky but bang for the buck I would go for the Delme Evans. Anyway, they are all so special that they are totally out of my pocket.