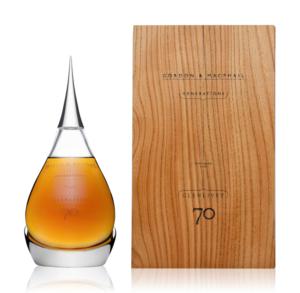 Gordon and MacPhail’s has done again. After last years Mortlach 70 years old, they have released now for its Gordon and MacPhail’s Generations range, the second ever 70 year old whisky! Presented at a ceremony in Edinburgh Castle and described as a “stupendous”, “smooth” and “voluptuous” single malt, and released under G&M’s Generations label, only 100 full-size bottles of this Glenlivet 70 years old exclusive whisky will be available to buy in 2011, each is presented in a stunning decanter.

This Glenlivet 70 years old was distilled on the 3rd February 1940, and aged in a first fill sherry butt.
Each bottle costing Ł13000 it won’t last long. *grin*

The worst thing about all this is that despite of being so expensive someone will buy it :)

You can have a look to one, until it last I mean, at Master of Malt from where the photo is taken.