A few weeks after tasting Talisker Storm I knew that Talisker was releasing another bottling, this time finished in Port casks: Talisker Port Ruighe. 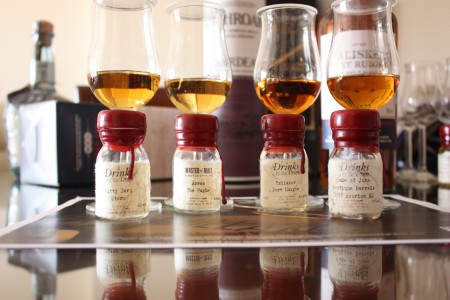 You can imagine how I felt!. I am not what you would call a fan of Talisker but I really enjoy the peat and pepper character of its whiskies and I have been in love with it since I tasted some of Talisker oldest bottles. I tried by all the means to get a sample from the distillery but…

I have had to wait for the guys of Master of Malt to released it in their drink by the dram section ( God bless them! ). So just to complete the tasting I added other whiskies that I were really interested in tasting: A Jura 1999 Bourbon XU, a now discontinued Arran The Eagle and the new Cutty Storm.

I have no idea how each of them are, but the Jura that says heavily peated… so let’s begin with the blended whisky.

A blended to break the fast, not bad way of starting. This is a new Cutty Sark released a few months ago and that features the same winning recipe ( bullshit ) of Cutty but adds older single malt into the recipe. Sounds legit! Let’s taste it…

87
The second creation of Cutty's master blender Kirsteen Campbell, following up the rich and unctuous Tam O'Shanter with something all the more eleegant - a fantastic mix of tropical fruity flavours with a hint of sherry spice.

So based on other whiskies I have already tasted I rate this Cutty Sark Storm Blended Scotch Whisky with 87 points over 100.

This is the last of a serie of four bottles called Icons of Arran. 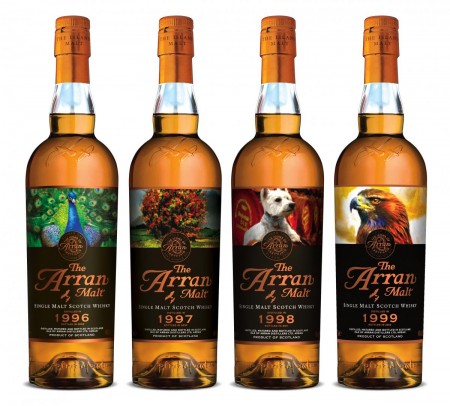 So after Peacock, Rowan Tree and Westie, came the Eagle. I have to say that I have a kind heart for Arran whiskies… I love their, usually perfect, balance of citrus, honey and vanilla.

“Interesting proposal from Arran with a great bourbon character. Great for a July, 4th”

So based on other whiskies I have already tasted I rate this Arran The Eagle with 88 points over 100.

Well, here we are. At last I can taste this NAS Talisker that will go along with Talisker Storm.

“Wonderful nose on a complex and very sweet Talisker. Nice single malt but I am more fan of their simpler proposals... like their 10 years old”

89
An early 2013 addition to Talisker's range, taking their classic Skye whisky and finishing it in ruby port casks, rounding the edges and bringing in rich, fruity sweetness.

So based on other whiskies I have already tasted I rate this Talisker Port Ruighe / Port Finish Island Single Malt Scotch Whisky with 89 points over 100.

And finally a Jura whisky, perhaps the distillery bottlings of Jura aren’t that impressive ( hell, try the 30 years old! ) but there are independent bottlings that are simply awesome. Best value for money ever… although you will need a deep pocket.

“It is a strange Jura. Quite bourbon influence on the nose with spices and vanilla and them ka-boom, the peat hammer”

89
70cl / 55% / Distillery Bottling - This Isle of Jura 1999 is part of the distillery's 'Boutique Barrels' series of single casks, bottled at full cask strength. This 'Bourbon Xu' edition has been been heavily-peated, and for that reason (plus it's the cheapest), we reckon it'll be the first to sell out.

So based on other whiskies I have already tasted I rate this Isle of Jura 1999 / Bourbon Xu Finish / Heavy Peat Island Wh with 89 points over 100.

Not every tasting is great! This is a tasting with good decent whiskies but none of them really shine. I have enjoyed the Talisker but I think I really prefer the 10 years old

What do you say? Storm, Port Ruighe or fuck them all and give me a Talisker 18 years old?